The last two seasons, Santos got the second place at the final of the soccer championship. Both times, losing at the very last game.
This season... they have lost 7 games in a row... The worst streak in many years.
They changed their uniform so I changed my lucky dress too!
Well... it proved it was not so lucky.
Today, I decided to give them (the team and the dress) a last chance so I wore it when I went out with my mom and my grandma to buy some groceries. 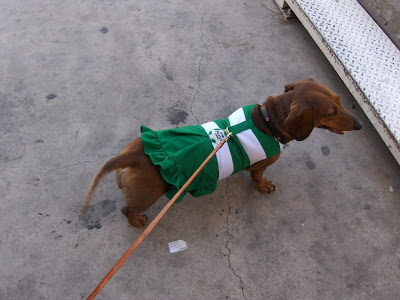 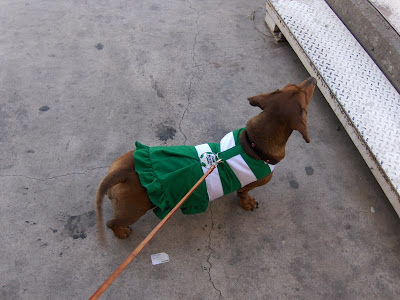 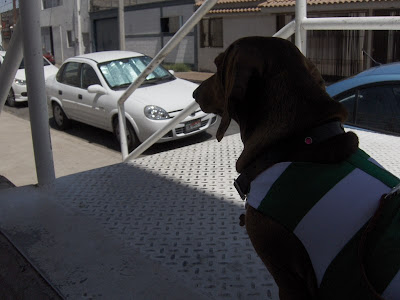 And it finally worked! Tonight they won 3-0!
They don't have a chance for the Championship now but sure it was nice to watch them winning again!
Aaaand, while we were watching the game... my mom made cinnamon rolls and some ham and cheese snacks! 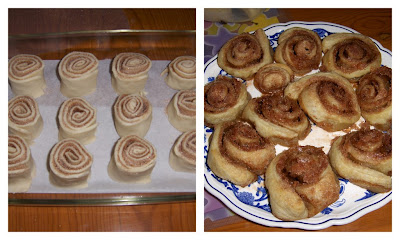 Oh-oh! My idiot mom took them out of the baking tray while they were still hot... and they kind of lost the shape... My grandma was very nice and told my mom not to worry... "They don't come into my mouth rolling"! Haa! 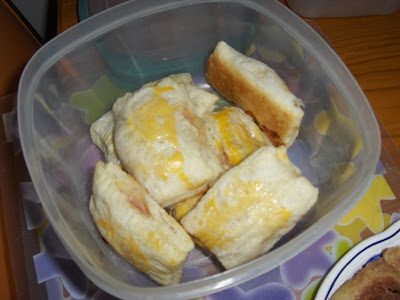 And the little ham and cheese "empanadas"
I hope you all are having a great weekend!
Besos
Lorenza
Publicado por Lorenza en 4/02/2011

We are looking furward to the NCAA Mens final game Monday -

The Bulldogs versus THE HUSKIES!

I think we all need ham and cheese empanadas!

Congrats to Santos. Glad your dress is still lucky. We're kinda drooling over your mom's snacks. They look yummy.

Excellent lucky dress! And those snacks look most yummy!

Congrats on your team! Those cinnamon rolls look really tasty eventhough they don't look pretty. I hope you got to taste test it, Lorenza!

The snacks look so good! Did you get to eat them too? Congratulations on your favorite team doing good!

Oh the Santos won and we are so happy for you!

I think that it was your dress that helped them win!

I agree with your Grandma, those cinnamon rolls look just yummy!

Congratulations to Santos!!! Hopefully your dress is now lucky!

You are making me hungry with all that yummy looking food!

Hi Lorenza!
Well, your yummies look all perfect to me, you grandma must be very good!
Wish I had been there to test them properly ;)

Well done Santos! How did you come up with their dress? Your human made it? Great work!!!

I am sure it was you bringing good luck to Santos! It won't be this year may be but next year with your positive influence they will be able to make it!!!

Glad to see that the dress has helped your team win Lorenza! You look so pretty in it. But those snacks look the best and we wouldn't mind those yummy rolls even if they are a bit lopsided!!!

Hola Lorenza!
Wow, a big congratulations to your team! I bet it was your nice dress that finally got them the win. The snacks look yummy! Who cares what they look like...it's the flavor that counts! They look very tasty.
Grr and a Hungry Woof,
Sarge, COP

You look so cute on that dress, princess Lorenza!!

Hoo Ray for Santos - you brought them good luck, Lorenza.

Who cares what the shape is - it's the yummy taste that counts. And those empanadas look mouth-wateringly delicious.

Have a great Sunday and we hope Grandma is doing well.

Oh Lorenza, cinnamon rolls are our Mom's favorite. Glad you team won. Too bad they haven't done better. Hope you got a little bite of the ham biscuit. Take care and have a super Sunday.

CONGRATULATIONS TO YOUR LUCKY DRESS

I think your snacks look wonderful.

Well its nice that Santos won a game, I am glad you brought them luck it looks just your colour.
Those snacks look great to me ham and cheese, yum yum.
Licks Bobby

Hooray for your team! Can we come over for empanada?

What a glorious day for you! Your team won AND your mom got noms. Yup, my great granny always said, "it won't hurt the eating any." How true.

I think you should be your team's mascot because you bring them good luck AND you look so pretty in your uniform/dress! Why don't you ask if they need a mascot? I think they'd take you in a heartbeat, paws down!

YIPEE! I bet your so excited. You look super cute in your dress.

I would still love one of those rolls! ;)

We're so glad to hear that Santos won, Lorenza! We know how much you love him.
Those snacks sure look delicious!

Those ham & cheese rollups look really good, so do the cinnamon rolls! I hope your mom shared some with you.

Congrats to your team winning.

Well done Santos! It's always great when your team win!

We were so happy when the Dubs won last night too!

Boy, you're mom is such a good cook. That food looks AMAZING!!!

Congrats to Santos!! Those snacks look so good!!

MMMMMMM! Empanadas!! I am glad your team won!

Oh, congratulations, Lorenza! It's nice to see your team win, even if they don't get the Championship. And no one can say you don't give them your support. You always do. Those treats look incredibly yummy. Those ham and cheesey thingies...wowser!

We started off thinking about how every time we see a dachshund, we think of you (which is pretty often.) Then we were thinking about how cute you look in your new green dress, cheering your team on. Then we started drooling on the keyboard. It must be time for supper!

Hi Lorenza! We are so happy to hear that Santos won! Very pretty new colors. Haha, we like cinnamon rolls in any shape especially right out of the oven.

So glad your Santos won to close out the season.

Sorrty we haven't been around much but Mommy still doesn't feel up to blogging all the time. We just finished reading your posts we have missed. Loved the Sticky Treat Video.

Mommy sent you an e-mail about the measrements form my dress and Weenie's vest and was wondering if you got it? If we get them in tim e, they will be are Easter fineryt.

That dress has luck written all ovah it.. but drool drool drool.. any ham empanadas left ovah?!

Mee is sooo glad your team dids win Lorenza, yoo is a most loyal fan mee finks. Your Moms sure does make nice lookin nommables

Congratulations Santos. And we think the green dress wears very well on you Lorenza:) Every dress deserves a perfect model!

Congrats! AND all the goodies look so yummy!

Glad your time won their game!! You look so cute in your team dress!!

We're finally back! We sure have missed you!

Woofs and Kisses!
The Fiesty Three

Congrats on your team, Lorenza- a win is nice anytime and we're sure it was your dress that propelled them to victory!

By the way, those cinnamon rolls look great to us:-)

Lorenza....what a beautiful team dress and boy does that food look yummy. How is G-ma feeling?
Hugs Madi

way to go lorenza you truely do have pawsome powers and my oh my your momma sure knows how to create a feast of treats!! thank you for my birthday wishes stoopid momma hasnt downloaded the proof yet she promises me she'll help me post about it tomorrow oh yeah, right! but im starting to like being 4 - loves and licks xxxx

Mmmmm that food sure does look TASTY! You look adorable as usual :)

Lowenza
I'm so vewy happy that Santos finally won..i was getting angwy that you wowe youw bootiful dwess and wooted and still nothing, but now finally
YEAHHHHHHH
Those cinnamony bunses and ham and cheese empanadas would jump into my mouf so fast I wouldn't have a chance what shape they wewe. They look soopew yummie
smoochie kisses
ASTA

Glad they finally won, and yum!!
Lorenza, My Mum loves cinamon rolls and she sure would love for your Mom to share her recipe! 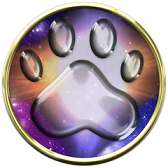 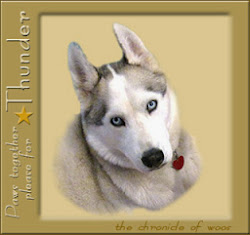 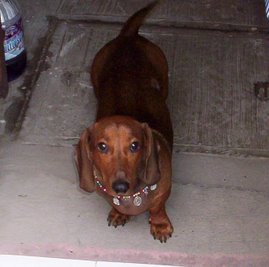 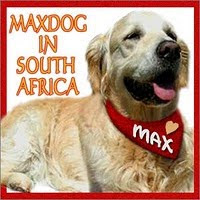 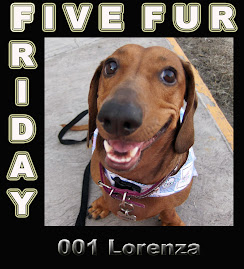 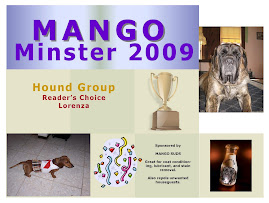 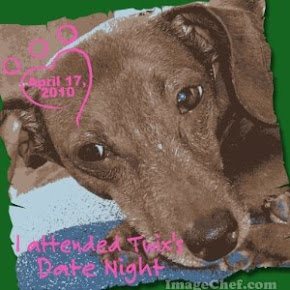 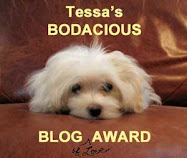 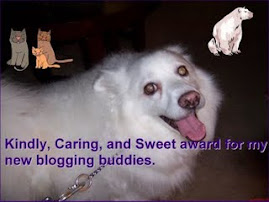 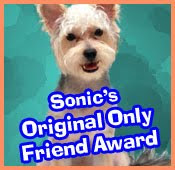